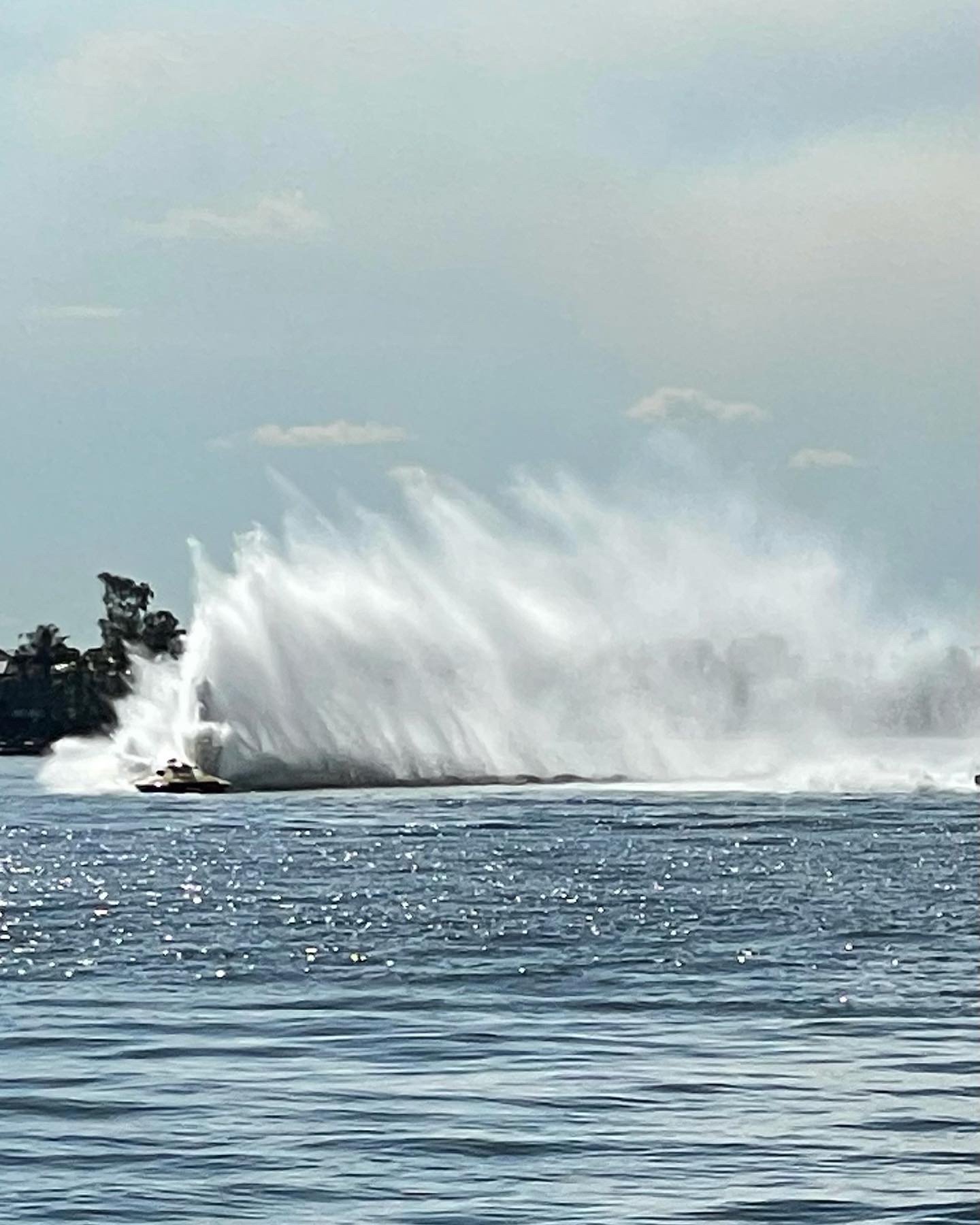 The sentiment of boat racing with the ROAR of excitement

Where else can you do this ………

All in the same place at the same time!

“It began way back in 1910, unlimited powerboat racing was in those days a sport for the wealthy or apparently wealthy few, and their mighty motors thundered a chorus that could be heard for miles as the message was bellowed out that the greatest single event in Australian motor sport was here. They were real racing men in those days and boats were not treated with kid gloves. To race your boat back in the Golden Years of the Griffith Cup you had to drive it to and from the race meeting. Often the only navigation lights were the flames from the red hot open exhausts, but they were the pioneers of Australian boat racing; they laid a foundation for the coming generations”.

And the generations followed ….. into what has become one of the best few days of motorboat racing on the annual racing calendar. The Griffith Cup weekend has evolved into an event to be celebrated by everyone! and the proverb is simply this ….

‘BOAT RACING IS FOR EVERYONE’

Here’s my take on the ‘Race worth stopping a Nation for’ … as I wandered around from one end of the pits to the other while enjoying all the live action in-between. The event was fully focussed on providing a successful race meet for the drivers/crew and their boats while accommodating in a variety of interesting and fun ways the diversity of spectators with comfortable amenities, an array of entertainment and food, and of course all with an excellent vantage point along the banks of the Yarrawonga foreshore to enjoy the thrills of competitive boat racing. The brilliantly informed and humorous commentators kept everyone informed around the circuit from one rip roaring lap to the next. Above all the V.S.B.C. ensured that their sponsors received a bigger bang for their buck than expected. As always the boat racing was exhilarating and the entire weekend satisfied all the senses, most especially my ears as the sound vibrated right through to my soul.

It was a fabulous weekend and above all, I met some of the best people ever! I was lucky enough to get a ‘back stage pass’ were I got a behind the scenes look into the total involvement and dedication that is required to execute such an amazing event yet they make it all look so easy. Boat racing seriously attracts such a great bunch of people.

and their mighty motors thundered a chorus that could be heard for miles as the message was bellowed out that the greatest single event in Australian motor sport was here …..

Boat Racing is for everyone!

Celebrating Life! “In the Fast Lane”

Celebrating Equality! Young and Old and everyone in-between

Celebrating Tradition with a Modern Twist!

Because everyone’s got a bit of ‘Rev Head’ in ’em!

Boat Racing is for Everyone!

The drivers, the spectators, the organizers, the sponsors and the vendors. Together we are one! Getting our thrills out of the most spectacular sport on earth!

Australian Power Boat Racing, doesn’t get much better than this!

The following pictures tell the story of an all encompassing, well organised, action packed few days, catering for everyone by the V.S.B.C.

In the pits with the drivers and crew

As my Dad would say “that’s pretty neat isn’t it – they’ll grow up healthy” and I must say, “I do agree”, watching these awesome kids and teenagers managing their boat and crew was re-assuring to see that this generation had a ‘can do’ attitude.

Once again the V.S.B.C. pulled off the most epic 3 days on the annual racing calendar with a well organised race meet for the drivers – boats & crew, an absolutely fabulous set up for the spectators & vendors, and the sponsors received way more than they bargained for. Everyone was catered for in the most exceptional manner. But of course, nothing beats the adrenalin pumping excitement of the racing boats in action. From the 95mph skiffs to the big Thunder Boats, if the sound alone doesn’t put a smile on your dial, then nothing will 🙂 “You gotta love it” Can’t wait for next year, from what I’ve heard, it’s gonna be bigger and better than ever!

With thanks to all involved

‘Get in on the Action’ – Sponsorship is welcome, please contact the VSBC for more info ….

In memory of the boats and drivers – the pioneers who figured it out and ‘made it happen’ (the one’s who just wanted to go FASTER & WIN) and who in doing so contributed to putting GILFLITE on the map, I dedicate this article (blog)

Once a race boat, now a Family Heirloom

Craig emailed me this beautiful photo the other day saying ….

“No better way to wake up”

I asked him if I could post his photo on social media ….

“No problem. I love it. Probably the reason I love the river so much. Has history too which is even cooler”.

Then I asked Craig if he would like to write a short bio / or a long bio if he preferred. Call it a blurb or even a memoir, I don’t mind. We just love hearing your story and sharing it for others to enjoy….

Here’s what Craig had to say (straight from the heart)!

“Oh gee, I’m not much of a writer haha. But ill see what i can do. I am still looking for more photos of it racing & when it was the start boat at Broken Hill”

Caprice was once a race boat, racing in the 5litre class (not 100% on that). After its racing time it became the stop/start boat at Broken Hill Speedboat club, the sticker outlines are still visible on the stern of the boat. Purchased by my Grandpa Bob Hissey from Tony McIntyre in the 80s. Bob was my Mums father; he purchased the boat for recreational use on the Murray River. The boat still serves our family today, mainly me though (although it is my parent’s boat, I claim it). So lucky & grateful to have such a thing in our family.

Photo’s and words by Craig Stagg

The step in the bottom of the hull reduces drag which in turn allows the boat to go faster.
The step in the bottom of the hull – cut away (approximately 460 to 500mm with variances depending on use and design), cut into the chine was a custom design/build to modify the wash. Often these boats were used for tournament skiing. The cut out enables the hull to run at speed with less wetted surface area therefore creating less drag. Less drag equals more speed. The cut out has nothing to do with the water skiing wash. Note: GILFLITE built more Spitfires than Lasers with this feature. Originally when this feature was designed into the Spitfire, the boat model was referred to as the ‘Spitfire Shortline’. The Laser was referred to as ‘The Laser Tournament Special’ Geoff Patterson is certainly an expert in the field of Australian ski boat hardware. Perfecting his art over many years Geoff eventually went out on his own and started A.S.B.H. about six years ago. Before this he worked for a couple of other marine businesses gaining knowledge and expertise in his field.

We’ve known and worked with Geoff in the boating industry for a long time. Over the years Geoff has provided GILFLITE with friendly, reliable service and precision made products.

It’s been great doing business with you Geoff, Thanks again for all your quality service and products. You’ve been an absolute champion and we’re gonna miss yu big fella!

In recognition of all your hard work, we wish you all the best of health, love and happiness on your new adventures Geoff, from the Team @ GILFLITE.

Enjoy your retirement Geoff and Keep in touch …... ‘BIG Thumbs Up’ and the STARS DOWN UNDER Water-Ski and Stunt Show Team

with Robert Dance and the Order of Australia Medal

Mr Robert Dance is so good at what he does, that he was awarded the Medal of the Order of Australia for his service to water-skiing.

Robert initially got into water skiing at quite a young age when he first learnt to ski with his Dad down at Dromana beach (on Victoria’s Mornington Peninsula). Soon after he got to see the famous water-skiers at the first Moomba Shows, eventually becoming the Director of Melbourne’s Moomba Festival.

Robert is a past president and director of the Victorian Water Ski Association, his many accomplishments include 50 years as a Ski Show Director at Melbourne’s Moomba Festival (1960 – 2010), Water-ski Co-ordinator at the 1988 Seoul Olympic Games and since 2011, Robert has been the Director of his famous Stars Down Under Water Ski and Stunt Show.

Now Robert has an OAM for his service to Water-skiing in Australia. Robert says “that’s where doing what you love can take you” The last walk around our family’s 82 spitfire 2 before going to its new home at the end of last year.

My dad had owned this boat since new, designing this with David Gill to include the extra sliver pin stripes and removal of the GILFLITE drop down lines at the back.

After 40 years being his most prized possession, he made the very hard decision to say goodbye to upgrade to a larger boat to tackle the ever growing boats on the river.

Our family has grown up around and behind this boat, with it filling the best of our childhood (and adult) memories.

It was a very sad day for our family to see this boat leave the driveway for the last time but we will always have the fondest memories of our GILFLITE.

We hope it provides its new family just as much joy as it’s brought ours.

308, dog clutch, unbelievably reliable and trouble free (the standard bent prop here and there over the years), the windscreen was broken by someone leaning on it many years ago and ending up becoming a part of the charm (first thing on new owners list), spent its most of its life on the river in Deniliquin.

Will be very missed. These are very special boats!

Photo Album below – Courtesy: Tyson Mahoney who describes these photo’s as follows;

These photos were taken between 1982 and 1995. It’s very hard to pick this as the boat looked relativity the same the day it was purchased to the day it was sold.

The Family that ski’s together stays TOGETHER

GILFLITE a style of life

Thanks for your heart-felt story Tyson, like they say “the family that ski’s together, stays together” ……. Your beautiful family GILFLITE Spitfire Mk II along with these fabulous photo’s and your farewell tribute will go down in history along with all the other fantastic history in the GILFLITE archives. We wish you and your family all the best, from the Team @ GILFLITE