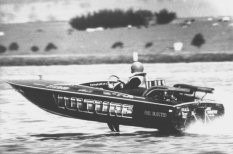 Bindy Lewis is a determined lady on a very serious mission… just like her father. Way back in 1969, Bindy’s father John Lewis was the shining new star on the Australian powerboat racing circuit.

At the wheel of the runabout Vulture and then the hydroplane of the same name, John Lewis set the inboard speedboat circuits on fire with his hard charging style of boat racing. Admired for his courage and talent, the names John Lewis and Vulture were a formidable team.

Quite apart from his dash and top performing hulls, John Lewis was frequently on the winner’s dais at speedboat meetings throughout Australia. Vulture the rear engined runabout broke through the 100 mph barrier in 1970, an achievement unheard of in those days for a 5 litre engine.

And in an era dominated by massive Rolls Royce Merlin powered hydroplanes, Vulture the hydroplane won the 1975 Griffith Cup, the pinnacle of achievement in powerboat racing. Once again a 5 litre Chev with John Lewis at the wheel prevailed against all odds.

Born in 1942 John Lewis’ racing life was relatively short, retiring from active racing after the 1976 season. Tragically John’s life was also way too short, passing away in 1988.

Not content to merely post press photos, media clippings and family photos that acknowledge the achievements of John Lewis, Bindy has now turned her attention to tracking down the two boats raced by her father.

“I am searching for the first of the Vultures, the runabout” Bindy said.

The runabout was a remarkable boat. Measuring just 16’ 6” long, this was one of the very first rear engined boats to really perform. The secret according to designer and builder David Gill, was to position the engine well forward, placing it directly behind the driver’s seat. It was virtually a vee drive mid mount.

“The runabout was sold to a racer in Sydney but very little is known of the boat after it left Melbourne. As far as the hydroplane we know very little about it for certain, but we do believe that someone along the way put a chain saw through it and destroyed the hull.”

“While there is a curiosity factor to know what happened to the boats, there is also a lot of interest to get the runabout back and restore it if it still happens to be around.”

“It would be a dream come true to have this boat restored to its former glory.” Any information about either boat would be greatly received by Bindy Lewis. She can be contacted …  http://www.bindy.id.au/vulture.htm

Possible Conclusion: The First Vulture ended up on the bottom of the Sydney Harbour and it was true; some one did put a chainsaw through Hydro Vulture.

Additional Note: from Bob Carter (at time of this post) and updated business logo / contact for Bob Carter – below …

“The Vulture runabout trail is pretty cold.   My understanding is that the boat went to Sydney and was eventually burnt.  As far as the ‘what-happened-to’ mystery files, Vulture is right up there with the great skiff Mandy”.

One Reply to “VULTURE – Part V Searching for lost Vultures”